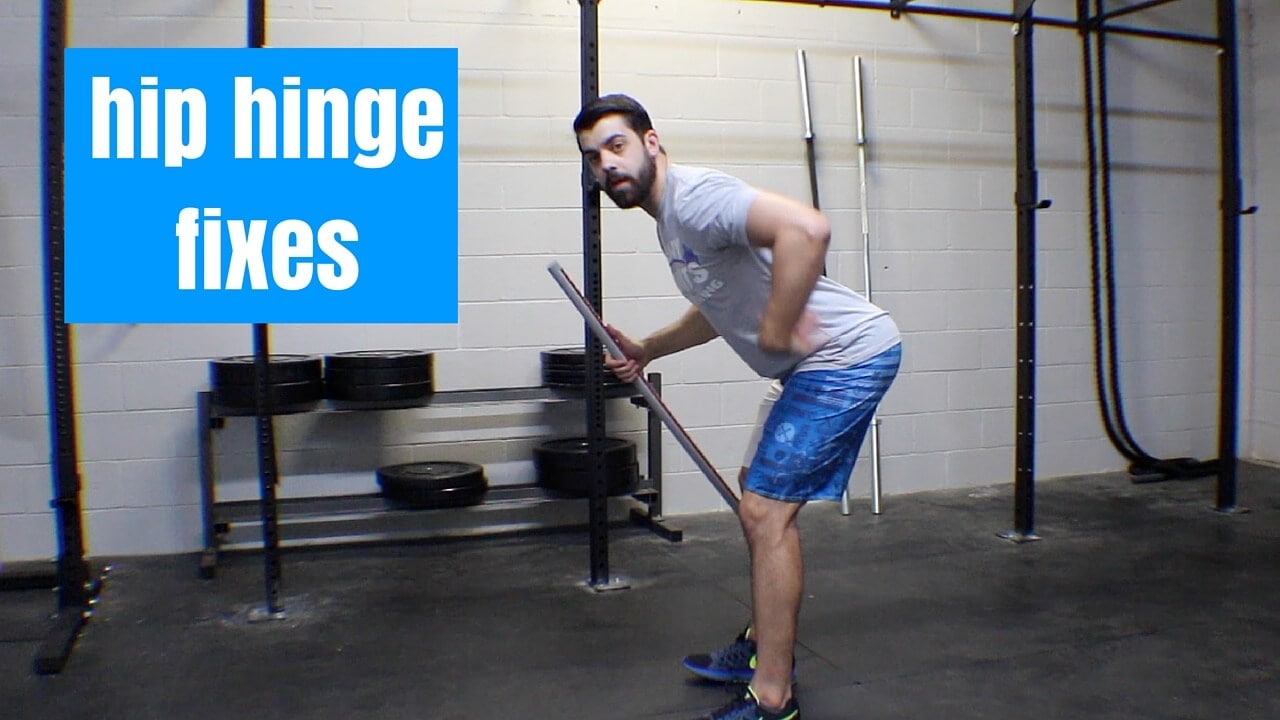 If you’re an Olympic weightlifter, a cross fitter, powerlifter, fitness athlete in general, something that you do probably every single workout is a hip hinge pattern. Really being able to perfect that movement pattern is going to go a long way toward your performance and your long-term health.

By the hip hinge pattern, what do I mean? I mean the ability to hinge at the hips, to bend from the hips, while maintaining a neutral spine. Different than a squat where a squat we have a knee bend and hip bend. Hip hinge just focuses on the hip joint itself. Why is that important? Every time you do a deadlift, a kettlebell swing, an Olympic lift, exercises such as that, you go through that hip hinge pattern. And mastering this movement is crucial for glute development.

Mastering it at a basic level is really important.

Something we’ll see with a lot of athletes is they have a very difficult time flexing their hips, going into that hip flexion part without their lumbar spine flexing as well. Those two movements in them tend to be coupled. They can’t disassociate those two. Instead of just moving from their hips, they’re also going to ram their lower back putting a little unnecessary stress on it. It’s also going to be a performance leak because some of that energy they’re trying to express and build up through their hips is going to be lost as it goes through their spine. They’re not going to transfer that to the kettlebell during the kettlebell swing or to the barbell during an Olympic lift as well. Mastering that is definitely needed.

How to assess the hip hinge

What we’ll see there a lot of times is that as people go down they’ll start to lose that bottom point of contact. If they lose that bottom point then we know that they’re flexing their lower back. They’re not keeping a neutral spine position as they go down. Sometimes we’ll see the opposite problem. We’ll see people lose that middle contact. If they lose that middle contact then their default as they go into that pinch pattern is to overextend through their back and again, lose neutral positioning.

Overextension of the low back is just as inefficient as the lumbar flexion. What we ideally want to see is them go all the way down. If I was to drop that down while I’m not move anything my hands are at knee level. If I was doing a deadlift, and Olympic lift, a kettlebell swing, I could get into this position, the hang position, with a neutral spine, my hips loaded, and complete the lift without being in bad positioning.

As I said earlier, a lot of people are going to struggle with that.

My two favorite exercises for correcting that are the kneeling hip hinge and quadruped rocking. For the kneeling hip hinge we’re going to have the same dowel alignment. We’re just going to go down into a kneeling position. Essentially what this is going to do is give the athlete a target. Sometimes athletes have a difficult time sitting their hips back and loading their hips up. If they’re down here they have a target of their feet. I’m just going to cue them, lean forward, and push your butt back and sit down with your butt going out to your heals. That’s also going to get rid of some hamstring flexibility requirements so you might need to screen out some of these hamstring flexibility in this as well.

A lot of times if you’re just getting an athlete doing this they learn how to shift their weight back, load their hips a little bit more effectively. If you go back onto your feet they’ll be better. If I do that and they can’t get that, if that doesn’t correct their hip hinge pattern, then I’m going to the quadruped rocking. I get the athlete down on their hands and knees. I’m going to cue them into the neutral spine position. I’m going to have them rock forward and back.

They’re going to rock back as far as they can without losing back positioning either direction. Sometimes they can feel that on their own. Sometimes you need to get that dowel back on them, get those same three points of contact and have them rock back and forth. It’s usually one of those two progressions will help the athlete get a little bit better control of their hip hinge. If you just have them work on that every day for about a week or two weeks they’ll really learn a lot about how to move their body through that hip hinge pattern which will hopefully result in a better movement pattern.