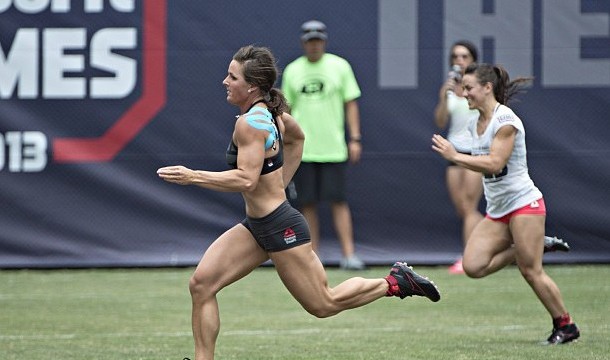 Sub-optimal glute strength is one of the most common faults I see in athletes. This can lead to a host of injuries as well as decreased performance.

We’ve previously discussed using the push press as a test of the hip (glute) versus knee dominance in athletes. Analyzing an athlete’s movement while doing high rep push press’s will show their default mechanics. Below left, the athlete is not effectively loading her hips and demonstrating a quad dominance pattern. To the right, she is loading her hips to most efficiently develop power.

You can read more about this test, and another glute activation test in my CrossFit Journal Article “The Hip and Athletic Performance.”

If your glute strength is sub-optimal, here are the best glute exercises I find work for my athletes. These can be used as part of a program designed to build up strength or as a warm-up drill to get the glutes ready to work.

Frog pumps aren’t a very advanced glute exercise. But for many athletes that have trouble feeling their glutes fire, this is great for getting them active again. This exercise is great for hypertrophy work as well as those that tend to feel like their hamstrings take over most glute exercises.

This simple variation on your standard bridge takes it to the next level. Emphasize a glute squeeze & pause before each repetition and progress to performing with a band across your hips or other resistance.

Side Plank with Hip Abduction

Take your standard side plank and raise/lower the top leg repeatedly. Research on this exercise has shown HUGE gluteus medius and gluteus Maximus muscle activation.

Front plank hip extensions have been shown in research to create very large amounts of glute activation. The combination of holding a plank and having the knee bent keeps the low back and hamstring muscles from doing the leg lift. The result is that the glutes get worked big time!

This one doesn’t look hard but 20 seconds into a set and your glutes will be on fire. Focus on driving your knee out into the band like you’re trying to break it in half. Increase the difficulty by squatting deeper.

Band pull-throughs are incredibly underrated when it comes to the glutes. The band tension increases as you stand up with maximal tension at lockout, where the glutes tend to work the most. Grab a heavy band and work sets anywhere from 8-20 reps.

Very similar to the band pull through but now the band is wrapped around our hips and we’re adding weight to the movement. By combining weights with a resistance band increasing the hip extension demands, this exercise is a killer glute exercise!

Hip extensions on a GHD are great for both the butt and the low back. Focus on squeezing your glutes at the top of each rep for a bit more burn. Some athletes also feel increased glute work if they keep their chin tucked down on their chest.

When performed properly, there are few exercises that work the hips, as well as the SLDL does. Focus on the keys discussed in this video to get the most out of this exercise.

Whether banded, with a barbell, bodyweight, or single-legged, hip thrusts are an awesome exercise to build serious butt strength! The setup position of this exercise with performed by bending your knees without the hips going deep into flexion we can minimize the contributions of the hamstrings and adductors…simply put this forces more work on your butt muscles.

Ready for your four-week glute fix? Check out out BULLETPROOF GLUTES program for four weeks of workouts designed to build up your backside!