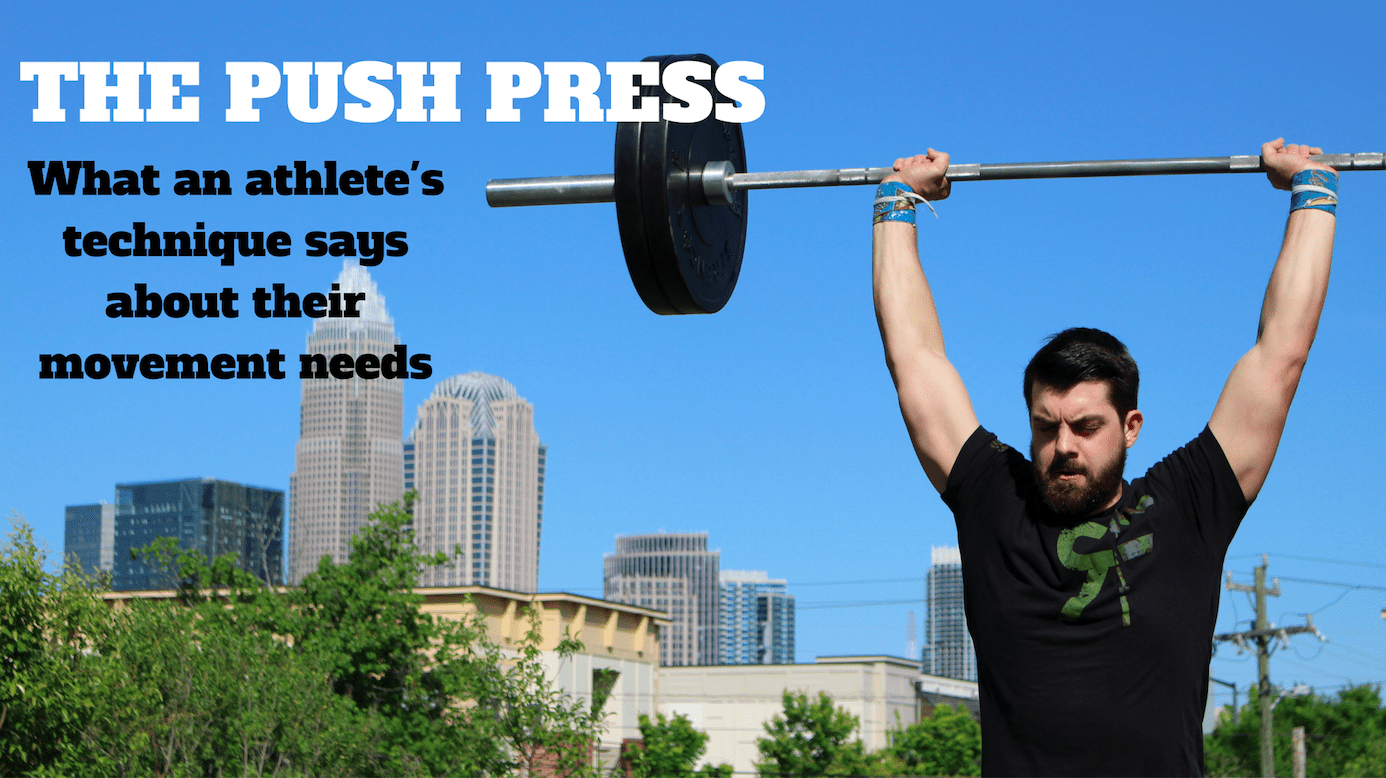 The push press is a great exercise for improving sports performance, but for a lot of people in the strength conditioning world, it’s a really undervalued exercise in terms of analyzing how an athlete moves and figuring out what they need to work on to improve as on overall athlete.

So what’s the Push Press? It is simply taking your standard Overhead Press and adding a little bit of leg drive to it. Power is generated from the legs. Then transferred through the core and into the arms. This allows athletes to perform more weight or more reps with the Overhead Press pattern.

In this movement we typically have the same slightly wider than shoulder-width grip on the barbell with the elbows pushed forward slightly.

So, the Push Press is initiated with what we call a Dip Drive and then we have the press. First, what we should see is the dip, where the athlete’s knees and hips flex. Then a drive, where the athlete then vitally extends knees, hips, and ankles. Here we are going to get into this triple extension position. In triple extension, the ankles are extended, knees extended and hips are extended. After that, the athlete presses the barbell overhead.

What will happen a lot of times, is the athlete, who’s a little uncoordinated, will start the stand, press early before triple extension. And they need to work on their coordination a little bit.

Another thing we’ll see from a coordination perspective is an athlete who drops down too fast, and the barbell will actually leave their shoulders. Instead, stand smooth, and in contact with the shoulders until the athlete’s Dip and Drive is done.

From there, if we look at the side viewpoint. We’ll see a lot of athletes who end up dipping their torso forward. We want the athlete to keep a vertical torso. If a vertical torso is achieved with the Dip and Drive, then the barbell’s going to take a really vertical path. But, if the athlete dips their torso forward, then as they stand and press, the barbell’s going to get pushed out in front of them. This will not be an efficient movement pattern for moving the most weight or performing the most reps with the barbell.

From there, we’re going to look at what is called Muted Hip Function. Greg Glassman discusses this in the CrossFit Journal, and it’s a really good insight into an athlete’s overall movement pattern.

Do they load their hips and quads with this movement? Or do they simply go into a quad-dominant pattern?

Here’s how we would diagnose a more quad dominant Push Press.

And that might be so much that their heels rise up or it might just be a clear shift forward.

The second thing we’ll see is a posterior tilt of their pelvis. So as the femur moves forward we’ll see the pelvis actually push through the tilt and low back, round with it as the athlete goes into the dip. Instead we want the athlete to keep a neutral pelvis, vertical torso, neutral core.

Next, as the athlete is then pressing the barbell overhead, there are a couple things we want to look for.

First, we want to see that the upper arm makes it to where it’s in line with the ears; with the neck staying neutral. So they should get to this fully open position. What we’ll see with a lot of athletes that have tightness in their shoulders or upper back is that they’ll actually jut their head forward to try to find themselves some false mobility. They’ll usually perform the same compensation in their military press exercise as well.

The other thing we’ll see with people that have tight thoracic spine and shoulders is instead of keeping a neutral spine as the press goes overhead, they’ll extend from their lower back to try to make up for that.

So, if they have this much shoulder flexibility, it’s obviously not a good position to hold a barbell this far out in front of you, so what they’ll end up doing is extending their lumbar spine so that they can get the barbell directly over their hips and feet as a way to compensate for the lack of mobility.