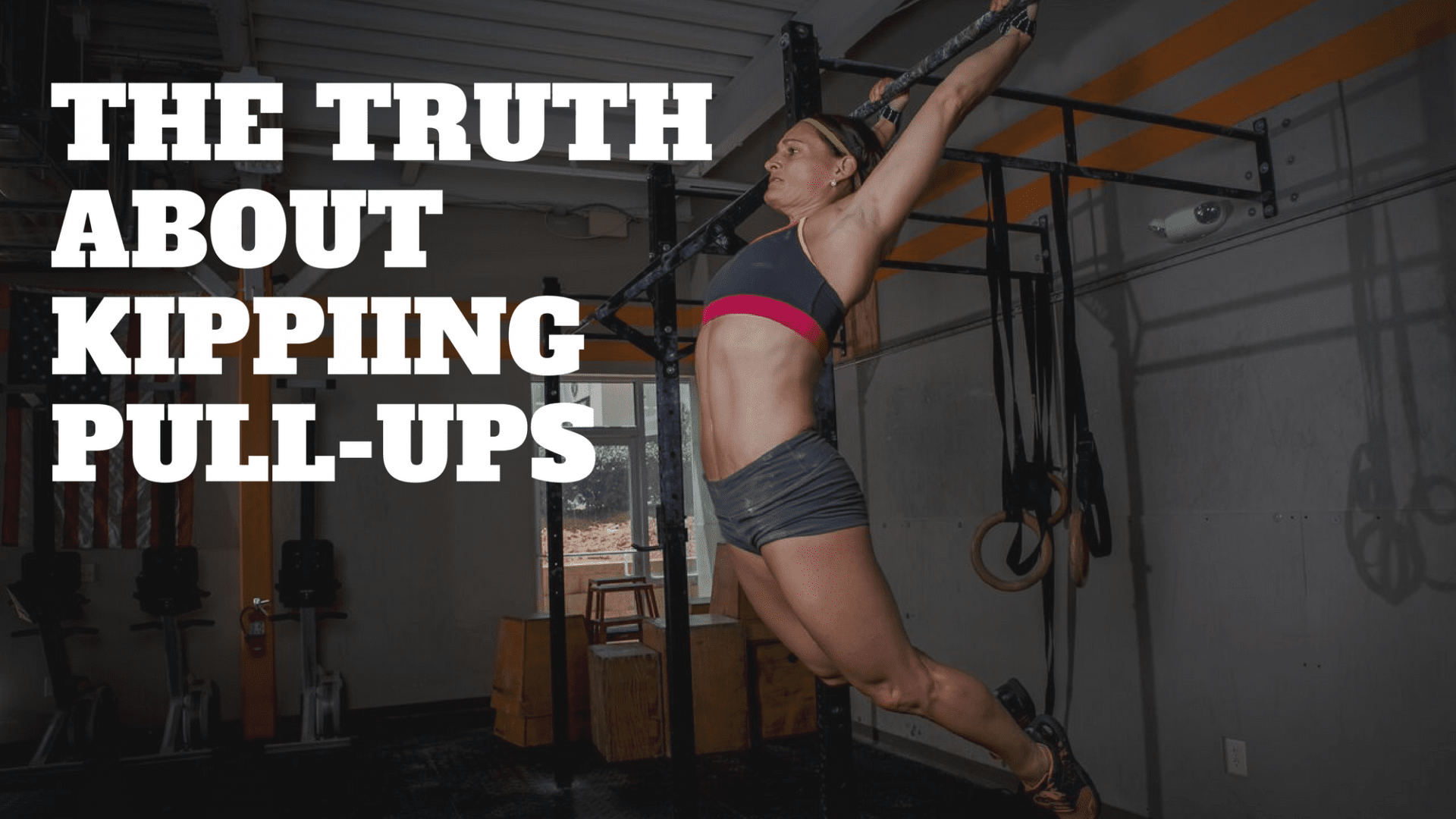 Without question, kipping pull-ups are the most controversial exercise performed in CrossFit. While a regular movement in CrossFit workouts, you won’t see it in the rest of the strength & conditioning world. And many non-CrossFitters will criticize the movement as being a non-functional, injury-causing movement that allows CrossFit athletes to cheat.

CrossFit athletes, on the other hand, argue that it allows more work to be accomplished in less time resulting in better overall workouts. But far too often coaches and athletes in the CrossFit world ignore the recommendations of CrossFit HQ to continue prioritizing the strict pull-up before kipping.

Having one foot in both worlds, I regularly get questioned about the safety and general usefulness of kipping pull-ups. So let’s break the movement down, analyze the arguments for and against its use, and outline some best-practices for kipping Pull-ups.

This article will focus on the kipping pull-up but for a discussion around butterfly pull-ups see this article.

What Is A Kipping Pull-Up?

According to CrossFit’s official publication, the kipping pull-up is a full-body movement that increases the demands on coordination and agility compared to a strict pull-up.

In his CrossFit Journal article, CrossFit founder Greg Glassman states that whether strict or kipping, every pull-up requires the same amount of mechanical work. Work meaning the physics definition where work = force x distance. By performing the kipping variation, an athlete can perform repetitions of the pull-up in less time. Since power = work / time, if we complete a workout in less time then a more powerful workout was performed.

And a major component of CrossFit’s methodology is to increase exercise intensity as they believe it drives great adaptations in the human body.

Based on his analysis, many proponents of kipping Pull-ups will argue that for metabolic conditioning workouts, the kipping pull-up is a better option.

Kipping pull-ups are not only useful for speed in CrossFit, but are a great building block to higher-level skills. The following free download lays out a gymnastics skills progression for athletes in CrossFit.

To be successful in the kip, an athlete must understand and execute the arch and hollow movement. These two shapes are important in creating tension, strength, and form that translate to the kipping muscle-up and the bar muscle-up. Without the knowledge of a strong kip swing, plus the strength of strict pull-ups, your foundation may not be sound enough to develop higher-level skills properly and safely.

What Are Kipping Pull-Ups NOT?

In fact, their stance is that all athletes should first develop strict pull-up strength and only after that begin developing kipping pull-up mechanics. By following this progression, the athlete will develop the strength necessary to control the rapid lowering that happens as the athlete descends in the kipping pull-up. As discussed in this article series I wrote for CrossFit Journal, we kip after developing strict strength just as we learn to walk after crawling.

Any good coach wants an athlete to have good bodyweight squat mechanics before adding extra resistance. And CrossFit HQ wants the same to happen with kipping.

These are two closely related skills, but we must recognize that they are different, and if you are a CrossFitter, you should develop BOTH skills.

When we recognize this as a separate skill, we can then understand that this is NOT a CHEATING PULL-UP as many call it. Rather simply a way to use full-body motion to perform more work in less time. This is similar to how a push press allows athletes to lift more weight from their shoulder to overhead than is possible with strict overhead presses.

In response to the argument that kipping pullups are an uncontrolled movement when performed with proper technique, this couldn’t be farther from the truth. Jeff Tucker, subject matter expert on gymnastics for CrossFit, further discusses the control aspect in this video.

There is one very important thing to note in this argument. Within any governing fitness body that trains individuals to coach fitness, we will see some followers listen to all recommendations. And we will see others ignore what they were taught. For example, we can find NSCA trainers not teaching proper deadlift form. Just as we’ll find CrossFit coaches not properly progressing athletes in kipping pull-ups. Don’t judge the entire CrossFit community because of your experiences with one gym, coach, or athlete.

If you search the interwebs for videos of kipping pull-ups, you are sure to see some uncoordinated flailing around performed by athletes who don’t have control of their kipping pull-ups. Because of their lack of control, they are surely placing unnecessary stress on their shoulder structures. But we can also find a million examples of uncontrolled squats with heavy weights performed throughout the fitness world, and we aren’t throwing squats outs due to the poor form demonstrated by a few individuals.

When properly coached, performed, and progressed to following the recommendations we’ll discuss below it is my opinion that kipping pull-ups do not pose any more significant health risk outside that which we see with any other movement progressions where we increase the dynamic nature of the movement. For example, injury rates in individuals running as their form of recreational fitness are going to be higher than those walking. But we don’t hear the entire fitness community arguing against running as a form of exercise.

Unfortunately, no data exists for us to prove the kipping pull-up safe or not. But, we are fortunate that at this point several research studies have examined CrossFit injury rates. The data from these studies show it to fall in line with other recreational fitness sports such as Olympic weightlifting and powerlifting. And these injury rates are FAR below that of which we see with sports like running. If kipping pull-ups were as dangerous as some proclaim them to be then would we not expect overall injury rates to exceed those found in other sports? Based on this research, claims that kipping pull-ups are “labrum destroyers” and “surgeon’s retirement funds” appear exaggerated opinions.

Research has shown the shoulder to be most frequently injured with gymnastics movements in CrossFit. Still, no studies have further broken this down to specific movements. Nor have they examined the programming to determine if proper progressions were programmed in those that were injured. And considering gymnastics movements are 1/3rd of off CrossFit movements, it isn’t surprising that a large number of injuries would happen during gymnastics skills.

Let me re-emphasize this; we cannot state based on anything other than personal opinion that kipping pull-ups are dangerous. BUT with almost any movement progression, going to a more dynamic or higher load may increase injury risks. For example, how often do we hear of people injuring their back during squat warm-ups? Very little. But as they get to their heavier working sets, we do get occasional injuries. It happens.

How Do We Properly Perform and Progress to Kipping Pull-Ups?

So if we want to do kipping pull-ups properly, we need to develop a few skills. First, the strict strength to do at least one pull-up. This is so the athlete is able to control the forces generated by the body as the athletes lower. And then continued progression of strict strength after earning your first strict pull-up should happen. Then, we need to own and control all the individual positions that make up the kipping pull-up.

For those that cannot currently do strict pull-ups, I must highly recommend our FIRST PULL-UP PROGRAM created by a Lead CrossFit Gymnastics Coach & former gymnast, Pamela Gagnon. 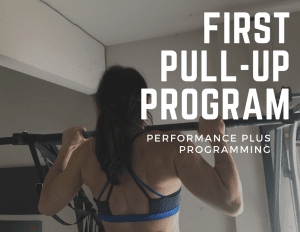 We also need sufficient shoulder mobility and thoracic mobility. Here’s a quick test to see if you have enough. Sit with legs crossed and your back flat against a wall. Grab a PVC pipe with a shoulder-width grip. See if you have enough mobility to touch your arms to the wall without your back coming off the wall.

Once you have the basics…progress

Once those positions are controlled, athletes can begin to work on mastering the kipping pull-up. Pamela explains some of the finer points of the kipping pull-up in the following clip. This is taken from a full educational video on the KPU available to Performance Plus members.

Skipped to the end? Here’s your summary.