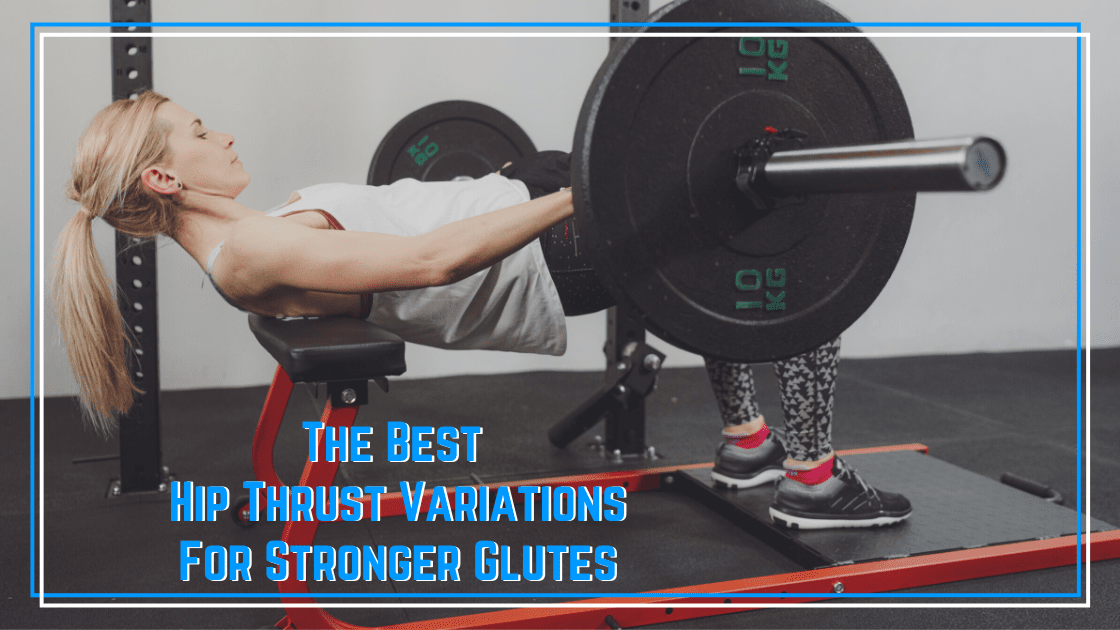 The hip thrust, popularized by Bret Contreras, is one of the most widely used exercises for targeting glute strength and hypertrophy. This movement takes the standard glute bridge and increases the difficulty by elevating the shoulders for a greater range of motion. A variety of different variations will allow us to increase the intensity of the hip thrust for more gains. Here are my favorite hip thrust variations.

Here’s our standard hip thrust. Place a barbell across your hips to allow for the progressive overload of the movement.

Our key points of performance with this and all hip thrust variations are:

I like this option as the band tension is highest at the top of each rep, where glute activation also seems to be highest. I’ll often combine band resisted with the barbell.

For a single-leg option, lift one leg off the ground and perform the exercise. It is shocking how much harder going single leg is.

If the single-leg version is too difficult, perform this variation where you lift with both legs and lower on only one. This can be done with or without the mini-band shown in the video. I prefer performing with the mini-band when our goal is to work both the glute max and med (lateral glute).

A great way to bias one leg with a little support from the second is to perform B stance hip thrusts. Focus on driving as much as possible through the back leg as you perform these.

If you work hard enough on single-leg thrusts you will eventually build enough strength that you need to add external load. My prefered way of doing this is to use this landmine variation. In this video, I’m using the Gut Wrench landmine attachment by Stronger Than U.

This is a great variation for working the glute max while the band tries to pull the knee in. As a result, the lateral hip (glute med) has to work harder on this variation.

Elevating the heels will kick in the hamstrings more. Focus on pressing the heels into the bench as hard as you can as you lift up and down.

This hip thrust variation has the largest range of motion of all the hip thrust options shown.

The tall kneeling hip thrust is typically going to be used as a high rep finisher or a tool to teach individuals to focus on the glutes finishing a hip hinge pattern.

Looking for more glute strength & hypertrophy? Check out our Bulletproof Glutes program for six weeks of glute finishers. Each workout lasts 10-15 minutes and trains the glutes for size and function.