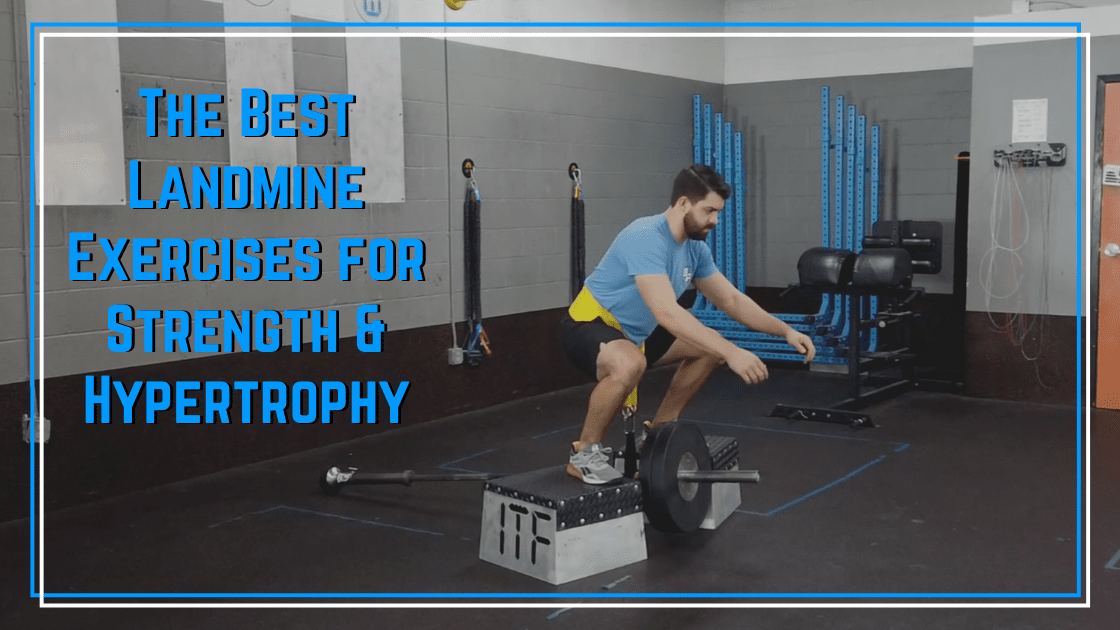 Having a variety of exercises to choose from is important not only for continual performance increases but also for mental breaks from always doing the same old moves. One of my favorite tools for changing my training up is to incorporate landmine exercises into my workouts. Landmine setups are incredibly versatile and allow us to provide great stimuli for strength and muscle growth.

There are many different options for landmine exercises. After testing about every option, my favorite is the Gut Wrench by Stronger Than U. This small attachment fits in my gym bag so I can easily take it back and forth between the two gyms I trian as and my physical therapy clinic.

Here are my favorite landmine exercises for strength & hypertrophy.

Landmine Exercises for the Lower Body

The landmine belt squat is a great exercise for strengthening the legs. Because the weight is hanging from a belt around the hips, the back is loaded significantly less than the legs. This makes it a great option for athletes needing to improve their leg to back strength ratio or for those recovering from a back injury or who cannot place a barbell on their back after shoulder surgeries.

The landmine hip hinge is a great exercise for strengthening the posterior chain muscles. With this hip hinge variation, the curved path of the bar forces the athlete to push his or her hips back, loading up the hamstrings and glutes for a great hip strength movement.

The landmine single leg deadlift (SLDL) is a great exercise for strengthening the glutes and hamstrings. Traditional single-leg deadlifts are performed holding KBs or DBs. This set up taxes the posterior chain muscles but also requires significant balance. For those wanting to focus more on strength & hypertrophy vs. balance, the landmine variation is a better exercise.

Landmine Reverse Lunges are great for strengthening the entire lower body. The quads, glutes, and hamstrings get a lot of work with this variation. Step further back to emphasize the hamstrings more, and step shorter distance for more quadriceps focus.

Landmine Exercises for the Upper Body

The Viking Press is a great upper body pressing variation that allows you to load the shoulders and triceps heavily. For those dealing with shoulder mobility or pain limitations, this is often a great option as the various grips combined with lower pressing angle often makes this more tolerable.

The landmine upright row is one of my favorite deltoid strength and hypertrophy exercises. Upright rows get a lot of negative attention but are actually a great exercise for shoulder health. I like performing with the landmine as the bar path encourages you to focus on pulling the elbow high and outside, which transfers both to Olympic weightlifting as well as helps recruit the delts more than the biceps.

The Landmine Press in Half Kneeling is a great shoulder exercise. When loaded appropriately your deltoids and triceps will be challenged. This is also a great variation for those with shoulder pain during overhead pressing. Because the angle is lower than a vertical strict press, it is often tolerated better by athletes with shoulder pain. For more barbell exercises that I like to use in rehab, check out this article.

The seated landmine lateral press is a pressing variation that is much more challenging than it looks. It requires postural strength as well as loads the shoulder up very well. Go lighter than you expect on this one!

The landmine push press is a great variation for heavy loading of the shoulders and training the body’s ability to transfer force from the legs to the arms. For those with shoulder mobility limitations or shoulder pain, this can often be a friendlier option than the traditional push press.

Another great landmine exercise for those with limited overhead mobility or just wanting a new pressing variation in their workouts.

Landmine lateral raises are a great exercise for the deltoids. You won’t need much weight at all to really burn the shoulders after a few sets. Focus on controlling the descent of the bar rather than letting it fall down.

The landmine T-Bar row is a great exercise for strengthening the back. Either directly grab the barbell as shown here or use various handles, towels, or ropes. If you have access to smaller diameter plates you will be able to lift through an increased range of motion.

Landmine meadows rows, created by bodybuilder John Meadows, are. a great move for upper back and grip strength. Set a barbell up in a landmine attachment and stand with the bar at your side. Grab the barbell sleeve and perform a row.

There you have it! My 15 favorite landmine exercises for strength, performance, and hypertrophy!