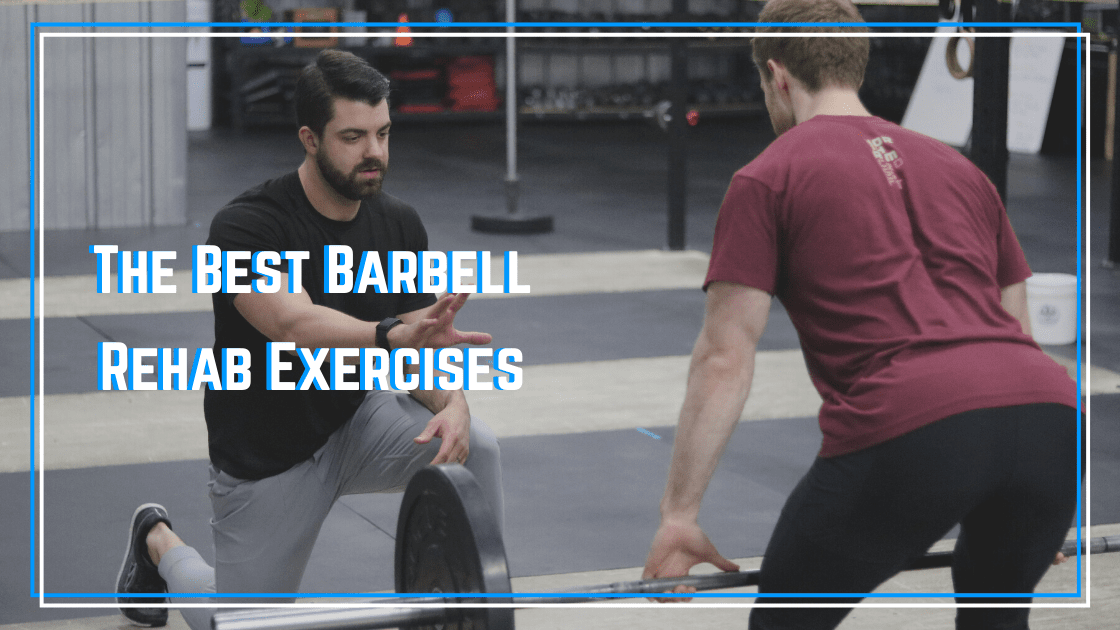 I realized a terrible truth this week…a while back, I wrote an article on the best kettlebell exercises to use in rehab. But despite being The BARBELL Physio, I’ve never written about the best barbell rehab exercises.
Travesty!

So here we go, our favorite exercises with the barbell to use in rehab!

For more rehab exercises, see my articles on the best kettlebell exercises and TRX exercises.

Without a doubt, this is my current favorite barbell rehab exercise! Single leg deadlifts are a great exercise for developing hamstring and glute strength plus coordination of the entire body. But, the balance demands often make it difficult to load the movement heavy enough to develop serious strength. The landline SLDL fixes that by reducing the balance difficulty. But aren’t deadlifts bad for your back? NO

Do you know what is good for preventing injuries? STRENGTH.

And do you know what the best exercise for building back strength is? The deadlift.

Done with proper form (and altering loads or range of motion as needed) deadlifts make a great rehab exercise, and there are research studies supporting deadlifts for back pain.

I hate theraband rows. So often, this exercise is so poorly loaded that it is simply a waste of a patient’s time in the clinic and a time filler allowing the clinician to bill more units.
The landmine row makes a great row variation to properly load the back musculature for strength while working lumbopelvic stability.

If Chris Johnson suggests an exercise, you better listen! Since trying this movement a few months ago, it has quickly become a staple exercise for runners and other athletes needing lower extremity stability work.

One of the best exercises for building lower body strength, step-ups also can be very friendly to pissed off knees. Loaded step-ups make a great exercise for any athlete needing to train when working through knee pain.

A serious glute strength builder, but just as important, is the hip thrusts use as a test and training drill for lumbopelvic control!

The landmine press is good shoulder exercise because it creates a level of instability that recruits your stabilizer muscles. On top of that, if you perform in a split stance or half-kneeling, your core automatically is engaged in a functional manner.

Returning to bench pressing after a shoulder injury can be a daunting task. The ability to perform a heavy bench press, pain-free, is a feat many lifters strive for their entire careers. If you’ve tried time and time again without success and your seeking for an option that allows you to press heavy without pain, inclining the bench just a tad can work wonders. The slight angle allows the chest to take on more of a role, sparing the shoulder joint itself.

Training the squat after a knee injury can be tricky. While the goblet squat does serve as a good way to re-integrate the squat pattern, the relatively vertical torso and a significant amount of forward knee migration may not be tolerated by some.  This is where the low bar squat comes into play. By carrying the barbell a little further down on your back, this will heavily recruit the posterior chain, limit the amount of forward knee translation, and generally be very tolerable, even with those predisposed to knee pain!

When rehabbing a low back or hip injury, building core strength is often part of the program. Initially, however, many cannot tolerate loaded core rotation. This is when we opt for anti-rotation drills, such as the landmine barbell torque. By moving only at the arms, you train the body’s ability to maintain tension while resisting an external force, a vital skill for both health and sports performance!