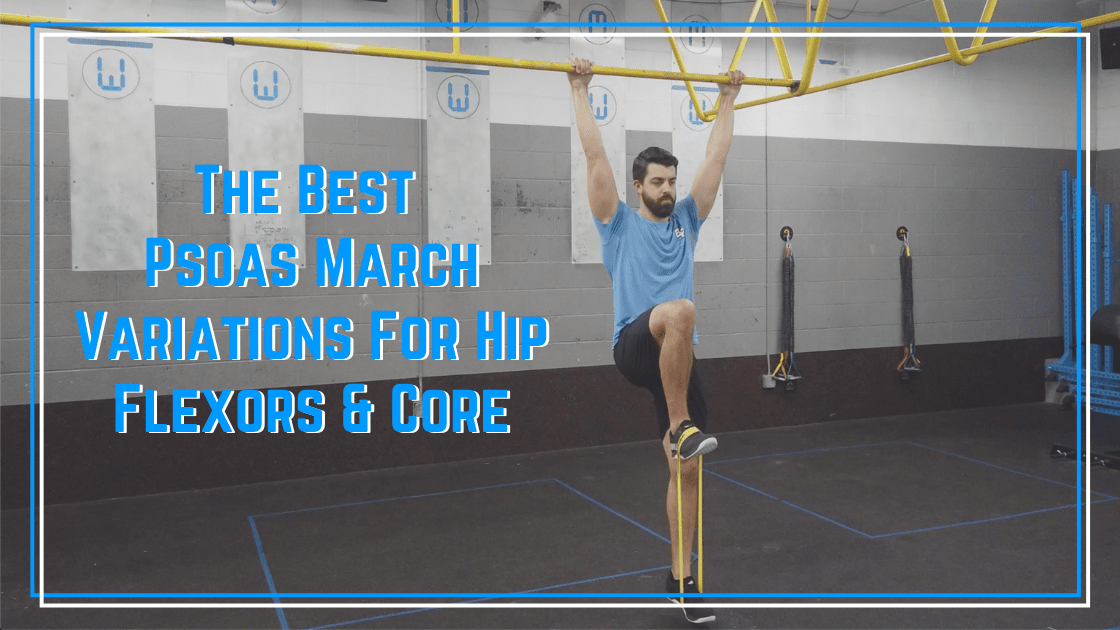 The psoas march is one of the best exercises for strengthening the hip flexors and abdominal muscles. It’s effectiveness makes it a staple in many programs I write for addressing hip impingement, hip flexor tightness, diastasis recti, and low back pain. If you’re looking to improve any of those areas, then these psoas march (PM) variations will be sure to crush your core and hip muscles!

The standard variation is performed with an athlete lying on his or her back. Hips and knees are flexed to 90 degrees with a mini band around each foot. The low back is kept flat on the ground as one leg kicks out and the other thigh remains vertical. Return and repeat on the opposite side.

This variation is my starting point. Especially in more irritable patients with higher levels of pain. This version works the hip flexors isometrically as they resist the kicking leg pulling the up leg down. Isometrics tend to be a little friendlier with pain levels are higher. When an athlete builds base strength here and symptoms decrease, we can progress to harder variations.

No we start with both legs flat on the ground. The working leg then pulls up until the thigh is vertical with knee bent to 90 degrees. We’ve now moved from an isometric contraction to the hip flexors controlling the motion concentrically and eccentrically.

If we want to put more emphasis on the abdominals, we can add an overhead reach with or without extra load. The arms going overhead makes the core muscles work harder to keep the back flat on the ground.

The high plank version ads increased abdominal challenging while working the hip flexors concentrically and eccentrically. At times I will perform this with a marching. Other times, I’ll perform with the feet on sliders.

We can bump the challenge of the high plank OM by performing with our hands on an exercise ball. The increased stability challenge will really challenge core strength.

The hanging psoas march adds in grip and shoulder girdle strengthening. Perform while hanging or make it ever harder by holding the psoas march as you do pull-ups for a seriously tough challenge!

The bridging variation is a very tough hip movement. We combine the PM with an isometric glute bridge on the stationary leg.