01 May The Psoas March – The Key to Strong, Flexible Hip Flexors

The psoas march is among my favorite corrective exercises to prescribe for athletes needing improved lumbopelvic control.

This exercise has helped athletes with everything from:

If you are ready for a stronger core and better control then give the psoas march and its variations a try!

If your hip flexors need serious help be sure to check out my HIP FLEXOR OVERHAUL program!

Level One – No resistance

For some, even adding a light resistance band to the psoas march will make it too difficult to perform. So Level One starts without added resistance. The athlete lies on his or her back with both thighs flexed to 90 degrees and knees bent as well. Their lower back will be held flat on the ground, held in place by the anterior core muscles. One leg is then kicked out while the other remains vertical. Resist letting low back position change. Depending on the level of strength of the athlete the leg can be kicked further up (easier) versus reaching out as far as possible (harder). 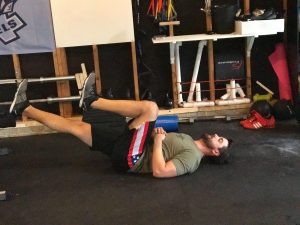 The Resisted Psoas March is where the magic really starts! We now place a small resistance band around both feet. The athlete keeps the same starting position as above but now kicks one leg out into the resistance band. The other leg that remains in the starting position must isometrically contract the psoas. This further challenges the ability to hold the spine and pelvis in position. This strong contraction of the hip flexor with a strong core muscle contraction to stabilize quickly abolishes the “tightness” many athletes feel in their hips secondary to weak hip flexors.

Once level two has been mastered, we move to the bridging psoas march that is many times more difficult than it looks. Now the athlete starts with his or her feet on a box with their legs fully extended and a small resistance band around the feet. The athlete lifts their hips off the ground and maintains this hip height while one leg is pulled into the chest (via concentric contraction of the psoas). Now we’ve challenged the hip extensors (glutes and hamstrings), hip flexors (psoas), and core simultaneously.

Want more? Be sure to check out Performance Plus Programming for four weekly workouts, lasting ~10 minutes designed by The Barbell Physio and gymnastics specialist Pamela Gagnon. PPP is made to improve your ability to control body positions, improve strength, open up your mobility, and bulletproof you against injury!