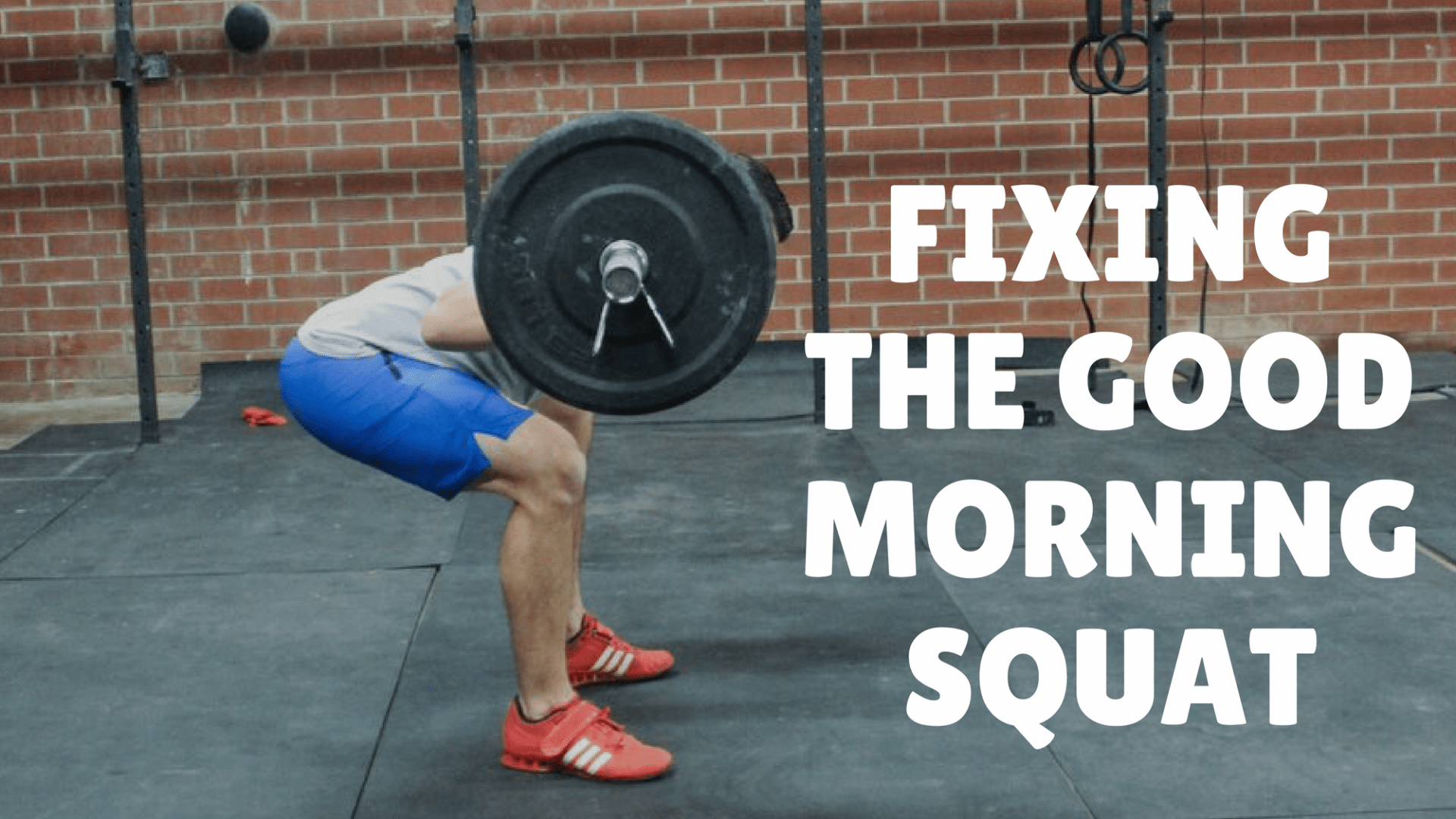 Commonly when lifting weights, we see the body choose to move in such a way as to bias its strengths and protect its’ weaknesses. That is because the human body is an efficient organism trying to complete any task using the easiest available route. The good-morning squat is a great example of an athlete moving is this manner.

Note: for more details on diagnosing squat weaknesses, check out Episode 6 of the Performance Plus Podcast.

So what is a good morning squat? As an athlete begins to rise out of the bottom of the squat, we should see his or her chest rise at approximately the same rate. This is shown in the middle picture below. When an athlete does the “good morning squat,” they will instead shoot their hips up at a much faster rate than their chest rises. Shown on the far right. 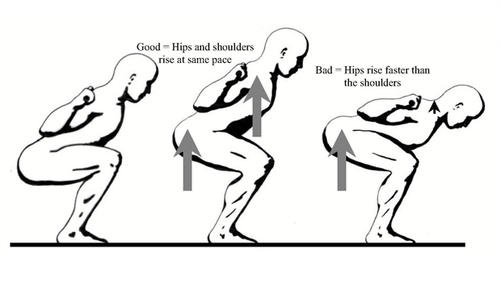 Consequently, athletes will miss lifts when they demonstrate this fault when their back gives out under the weight, and they fail. So quite often, they will then begin to focus on increasing back strength to improve their squat.

But what they fail to understand is that it is NOT back strength that is their limiter.

To understand this, the athlete must first realize why they shoot their hips up rapidly when coming out of the hole.

As stated earlier, the body is great at optimizing movement. So, the athlete shoots their hips to load the hamstrings, hips, and low back. They do this because these are the STRONGER muscles. Their movement pattern takes the stress off the relatively weaker quadriceps muscles.

Take a look at this picture as an extreme example of the good morning squat. Notice that as the hips rapidly move up, the barbell moves very little distance. This is the quadriceps working AROUND the barbell rather than transferring force into the barbell. In the second picture, the athlete has now loaded their hips and hamstrings up to be the prime movers. 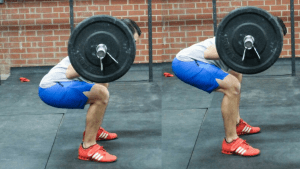 Now it won’t always be anywhere near as noticeable as this picture. Instead, a hip dominant (and weak quad) squat will quite often look like the following video. Notice the distinct movement to shift the hips up & back to further load the posterior chain and decrease stress on the quads.

As mentioned earlier, quite often, people demonstrating this good morning squat pattern will work on strengthening their back as they miss lifts when their back can no longer support the loads on it. BUT the route cause of most people’s good morning squat is quad weakness, so this must be addressed to fix the problem.

Many people’s first thoughts will be to employ front squats as it is widely believed that front squats lace more stress on the quads, but two factors would influence me to look otherwise. First, research on front and back squats shows approximately the same levels of quad and glute ratios during the lifts. Secondly, athletes with the good morning squat pattern will also do this with front squats (check out a subtle example of this here).

Instead, we have to choose squat variations that force the loading of the legs without loading the back.

This exercise make a great start as the weight hanging from an athlete’s hips unloads the back and keeps all of the stress on the legs.

Spanish squats are another favorite of mine when working more for hypertrophy of the quads. This variation will keep constant tension on the quads.

The Roman Chair squat sets you up to really load the quads up with relatively light weights. Focus on pushing the back of your knee into the barbell and pushing your toes into the plates. These will keep constant tension on your quads as your squat.

This exercise reduces spine loading with the focus on driving with the quads makes this a great option. Unlike the two above, you can also load much heavier and go into lower rep ranges (belt squats and Spanish squats are hard to do for low rep sets due to loading restrictions).

BFR can also be employed to bring up weak quads. As I’ve covered in several previous articles, BFR has been shown to greatly impact strength & hypertrophy. We can use BFR to quickly add mass and strength to the quadriceps.

Our Bulletproof Quads program is an accessory WOD program with 3 weekly workouts designed to supplement your current training. These short workouts will add necessary volume to improve your quads but the overall volume and intensity remains low to reduce recovery demands.

For more on the good morning squat, check out this article by Greg Nuckols and this video from Juggernaut Training.