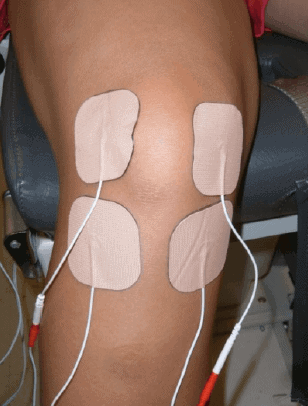 Over the past two months, I’ve used TENS (transcutaneous electrical nerve stimulation) more than I ever have and with great results. Normally, TENS is rarely used by me in treatment plans and only saved for those in severe pain needing a temporary “break”. Lately, though, TENS has been an invaluable tool in improving quadriceps inhibition after knee surgery.

My friend Matt Harkey, a Ph.D. student at UNC-Chapel Hill, introduced me to this use. His research has strongly suggested that TENS is a powerful tool for improving quadriceps control after knee surgery (see references below).

Upon starting a new job, one of my first patients was a 45-year-old female four months out from ACL reconstruction. During my evaluation, I was amazed that at this point in her rehab, she could still not perform a straight leg raise without a 40-degree quad lag or perform a seated knee extension beyond the same angle! I consider a proper straight leg raise a WEEK ONE task. We were dealing with some significant quadriceps inhibition.

After two weeks of further work specifically on quad activation, I sent her back to her surgeon with a request for a Nerve Conduction Velocity test. The results showed what I suspected, significant de-innervation of the quadriceps with almost no signal to the vastus medialis.

A few weeks later, I was able to meet with my Ph.D. candidate friend who introduced me to the concept of TENS post-surgery.

We immediately began to implement the below protocol daily on this patient: “The TENS electrodes were applied on the medial and lateral superior, as well as the medial and lateral inferior, borders of the patella. Care was taken not to place TENS electrodes on the quadriceps muscles or muscles of the anterior leg. The 2 TENS currents (pairs of electrodes) were crossed to encompass the most surface area under stimulation. Participants in each group were instructed to utilize the TENS or placebo units during all therapeutic exercise sessions and at least 8 hours per day when they were the most active.

The stimulators in the active TENS and exercise group were set to deliver a continuous TENS biphasic pulsatile cur- rent at 150 Hz, with a phase duration of 150 microseconds. Participants were instructed on how to increase and decrease amplitude, which could be adjusted between 1 and 60 mA. Amplitude was set at a strong, comfortable sensory stimulation intensity that was not strong enough to elicit muscle contraction. Participants were instructed to maintain this sensation throughout each treatment session by adjusting intensity as needed (Pietrosimone).“

Over the next few weeks, full straight leg raise was restored without quad lag. Walking, pain, light exercise all greatly improved. Most impressive, over the past five weeks, this patient gained 1.25” on her thigh circumference.

Since that time, I’ve implemented this protocol with other patients post-knee-operations with continued great success. Please note, this protocol is useful for all post-op knees, not just ACL reconstructions. To learn more about this, read the following summary, and see the journal articles below.