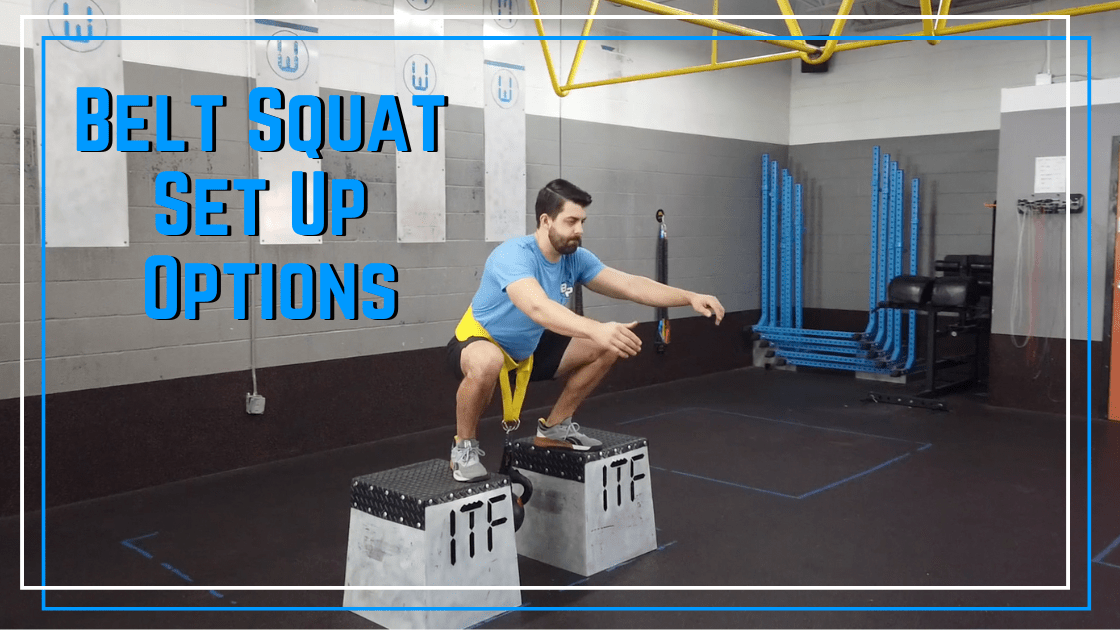 Belt Squats are a fantastic squat variation where the resistance is attached to a belt around an athlete’s hips so that the load stays on the legs with minimal spinal loading. In this article, we’ll discuss the pros and cons of different options for performing belt squats.

First though, let’s cover why athlete’s might want to incorporate belt squats in their training. During a back pain flare up, the belt squat is obviously a great choice as the belt squat will significantly reduce the load on the back while allowing you to continue work on leg strength and/or hypertrophy. Second, the belt squat is great for athletes with legs that are relatively weak compared to their back (these athletes typically have a good morning squat fault).

This option is typically the easiest to set up and begin belt squatting with. Use a dip belt, or preferably an actual belt squat belt, to hang weights from while standing on two boxes.

While this set up is easy, it comes with a few cons:

This option is also relatively easy to set up. Simply get a barbell set up with weights on one end and a landmine attachment at the other. Place a box on either side and use a BS belt to connect to the resistance. Then squat.

The biggest issue with this set up is that you must have an anchored landmine set up or the weight on the opposite end of the barbell will not be balanced and the bar with jump in the air as you squat. The second issue is that this set up forces you to follow the curved path the barbell naturally takes as your squat with this set up.

There are several different lever belt squat systems available such as the Pit Shark, Rhino, and Revolt Fitness. In all these set ups, the resistance sits on a levered arm that starts elevated.

There are two great benefits of this set up over the above :

But, this set up also comes with the negatives of being forced into an unnatural movement pattern. The level arm pulls you forward as you squat down. This results in your quads work like crazy. But, glute activation is much lower than what you’d feel with a barbell squat. In the below picture, notice the angle of pull being placed on the athlete using a lever belt squat. 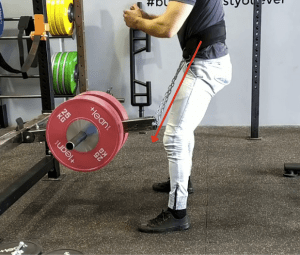 By far my favorite option for Belt Squats is the Squat MaxMD system. With this machine, athletes stand on an elevated platform with a hole in the middle. The hole size can be adjusted to match your squat stance.

A post shared by Belt Squat Proven by Science (@squatmaxmd)

Weights are held on a shelf that can be rotated out of the way with handles, making loading/unloading incredibly easy. The weight also slides up and down a light guide rail. This guide isn’t sturdy enough to hold you in perfect position but gives you enough feedback on your positioning that you must fight to stay in “the groove” of your squat.

With the SquatMaxMD the weight moves only vertically.  The result is a large amount of quadriceps work, but also significantly more glute work than in lever arm systems. Independent research studies have also confirmed this, showing the SquatMaxMD to better match the muscle activation patterns seen in the traditional barbell squat (1, 2, 3).

In short, it makes you fight to keep great squat form while doing a better job building the glute strength.

A post shared by Belt Squat Proven by Science (@squatmaxmd)

There are several different options for setting up belt squats to improve leg strength with reduced loading on the spine. Each offers unique benefits and drawbacks depending on your goals, finances, and space availability. You’ll know be able to make more informed decisions on which set up is best for your training!