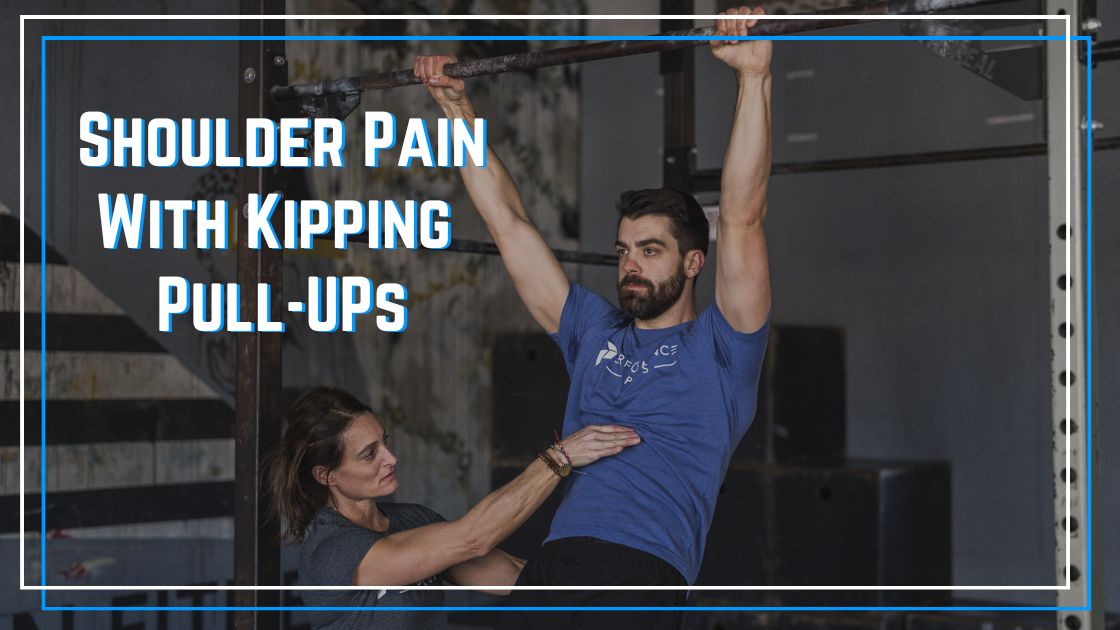 In this video, we talk about shoulder pain with kipping pull-ups and muscle-ups and four of the most common things we see leading to people getting irritated shoulders during those movements.

We also recently discussed this topic on the Performance Plus podcast!

The first thing’s going to be, when we look at somebody doing Kipping pull-ups, they’re going to move back and forth between the hollow and arch position, and one really common cause of shoulder pain we’ll see is in that stiff shoulder. When somebody’s trying to open up, they’ll get to where they run out of their shoulder motion. And it’s basically like, boom, they hit a brick wall.

As they try to Kip, they’re constantly going into that brick wall, hitting their shoulder stiffness, and those tissues just get irritated from being cranked on it in range, so you want to make sure that you have great shoulder mobility if you’re going to be doing Kipping pull-ups or muscle-ups so that you can get to that fully open position in the shoulder.

Our Overhead Mobility Overhaul program is great for athletes falling in this category.

For more help improving your mobility, check out our FREE Ultimate Mobility Checklist!

A second thing that we’ll see that is often related to shoulder mobility, but not always, is going to be lack of a good solid shoulder foundation when somebody goes into the arch position. So we’ll see a lot of people end up in this bent elbow position where they also dump their shoulder forward, and that places a significantly increased amount of stress on the shoulder.

What we want to see is active shoulder position, and as that person opens up, the pit of their elbow on the inside is going to stay facing their ear instead of bending and dumping forward, where we see a lot of rotation happening through the shoulder and just not a good position for pulling.

The next thing we’ll see is lack of good kipping mechanics. We talk about this a lot at Performance Plus Programming, especially in our Kipping mechanics plan, but the Kip is generated from the shoulder and the core, not from the hips.

We’re going to imagine that Pamela is hanging from a bar. We’re doing this in reverse. It makes it a little easier to visualize, but you’re going to see that she’s going through a hollow position here and into an arch position, and what you’ll notice is that her hips don’t move at all. What does move is her rib cage. So she opens her ribs up, she closes down. That’s her abs controlling the motion.

The second thing you’ll see is her shoulders getting opened up in the arch position and then closing when she goes hollow. That’s her using her lats, and if we were hanging from a pull-up bar, she’d also be pulling down on the bar to maintain an active shoulder position and let all those muscles around the shoulder keep her in that hang position.

We need to see really solid mechanics on the Kip. If we see people get a little too dominant with their hips, where they’re kicking their legs back and forth and we’re seeing their hips break, that’s where we’ll see a lot of stress put on the shoulders. And I like to describe it as this, your hip muscles are a lot bigger than your shoulder muscles.

So what do we want to be in control of a movement that places stress on the shoulder? We want the shoulder in control of that. We don’t want the hip throwing all of this extra force and motion at the shoulder. Not only is it more stressful on the shoulder, but positioning will be thrown off if you do a hip dominated Kip, and long term, your ability to crank through a lot of reps will be significantly hurt.

For athletes needing to clean up their kipping pull-up mechanics, this program is awesome!

The final thing that we’re going to see a lot of individuals struggle with when it comes to their Kipping mechanics and their muscle-ups leading to anterior shoulder pain, is just generally lack of lat strength.

The lats are going to be your prime mover, whether it’s a Kipping pull-up, a strict pull-up, a strict muscle-up, or a Kipping muscle-up. When they’re not super strong, what we tend to see is, as somebody’s coming down out of those movements, instead of controlling that down, and it’s fast coming down when we’re talking about Kipping movements, but it’s fast under control. When the lats aren’t strong, we’ll see people get jerked down into the bottom. We’ll see that happen quite a bit. And that little extra jerk is just enough that it places extra stress on the rotator cuff and will typically lead to it being irritated.

Learn exercises to address shoulder pain here and movements specific to lat strength in this article.