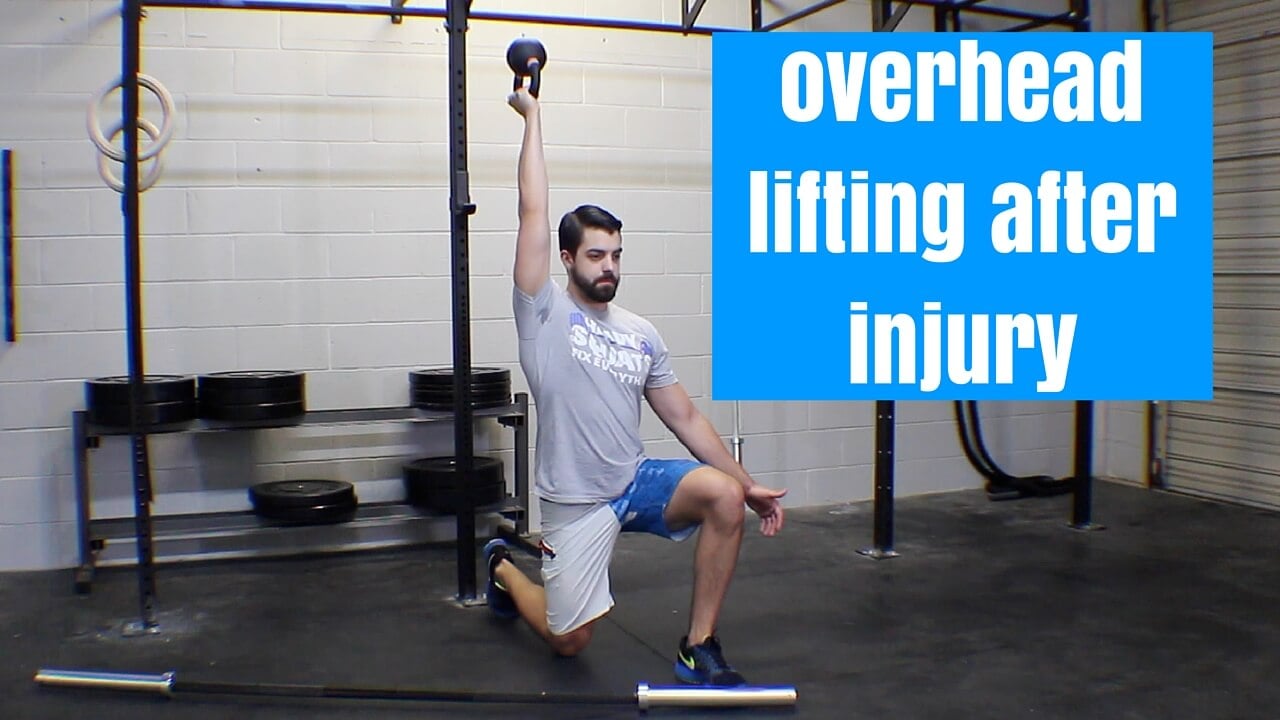 Overhead Lifting After An Injury

In the following video, I discuss my three favorite exercises for athletes returning to overhead lifting after an injury. Training during an injury is important for maintaining health & fitness.

Returning to overhead lifting after an injury can be difficult and for the fitness athlete or the CrossFitter, Olympic weightlifter. Because, almost every single workout that you do involves heavy shoulder movements. It ends up being an area that gets banged up every now and then and you deal with injuries. If you’ve dealt with a significant injury and you’re progressing back to pushing those heavyweights again, these three exercises are a great way to build back up. There is a large gap between the rehab exercise you’ve been doing and push press, the jerks, the strict presses. These exercises will help bridge the gap back to overhead lifting after an injury.

Overhead Lifting After An Injury Transcript

Let’s run through these three drills real quick for Overhead Lifting After An Injury. First, because of the bottoms up, it’s obviously a little bit more unstable. This will make the stabilizers of your shoulder have to work a little bit harder. That’s going to do a really good job of tying in those rehab exercises you were doing to the more advanced movements that you want to move to. Second, because of that instability, you’re not going to be able to load that as heavy as you would if you were pressing a dumbbell or kettlebell with the bottom down. Which means, that you’re not going to put as much stress on the shoulder joint. Again, that’s going to make it a good intermediate exercise.

The next thing that I like to do to return to overhead lifting after an injury is simple overhead carries. Just as simple as it sounds. Let’s get a kettlebell overhead. Let’s get a dumbbell overhead, maybe even a barbell overhead with the bottoms down, maybe the bottoms up. Then let’s walk with it. We will train that stability in the overhead position, again, to tie everything that you’ve been working on in. Lastly, I like to landmine press for getting athletes back to overhead lifting after injury. The landmine press is done with the barbell. It’s basically an overhead press type pattern, but you’re not going into full shoulder flexion. Instead, you’re only going about halfway. I’ll get down in kneeling, hold the end of a barbell, and you’re just going to press overhead. Though this is my go-to exercise when I’m ready to really start adding some weight and getting the athlete loading up the press. Because we’re not going into that full overhead positioning, a lot of times athletes will tolerate load a little bit better. If you’re temporarily doing all their pressing with the landmine position, maybe adding some weights to the end of the barbell to increase that, and then get them back to doing strict press, push press, and jerks again.