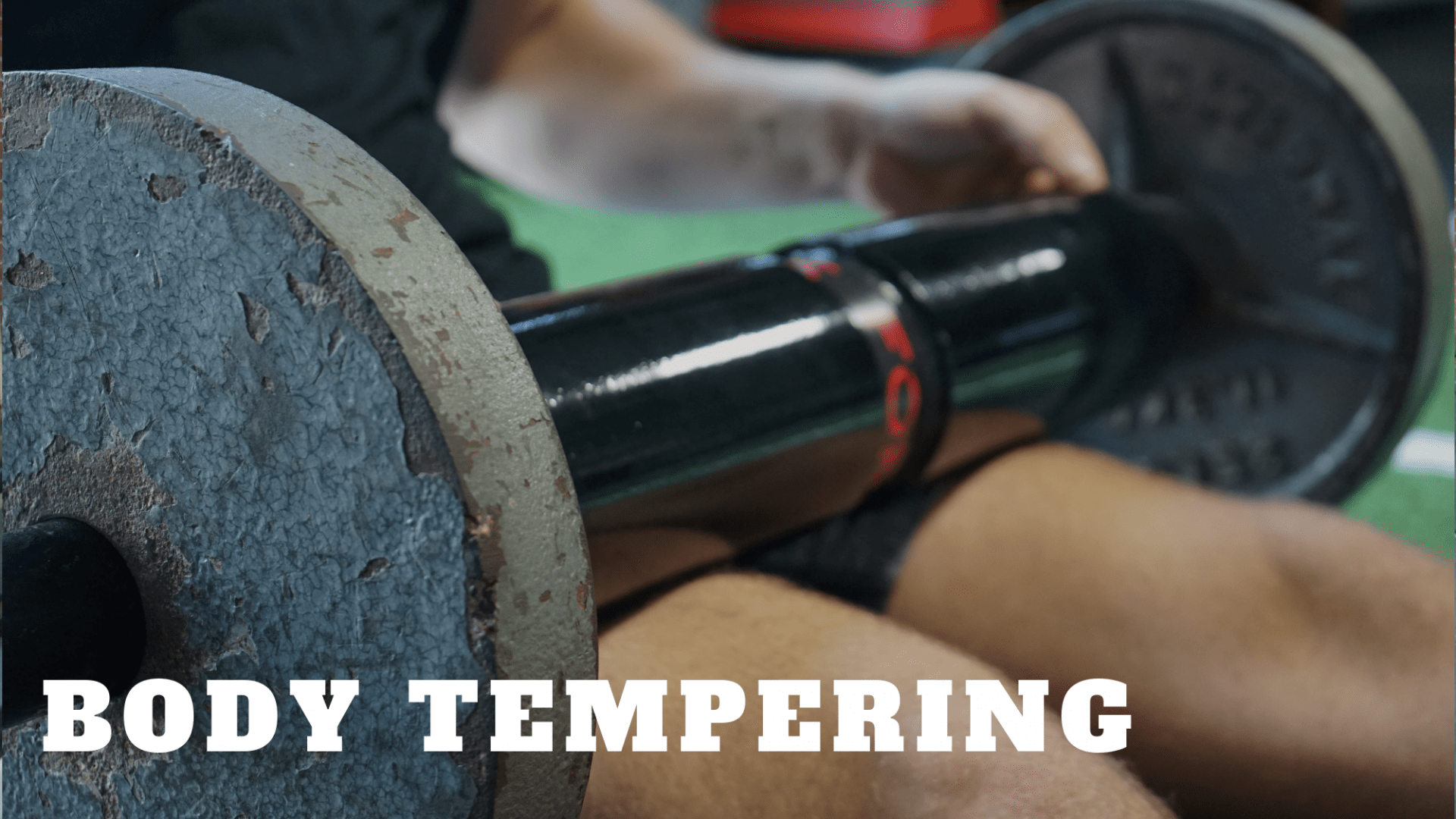 Body tempering (BT), invented by power lifter Donnie Thompson, has gained lots of popularity in the fitness world in the last few years. So what is BT? Does it work? How does it work? Let’s discuss….

What Is Body Tempering?

Body tempering is a form of soft tissue mobilization performed by rolling weighted cylinders across muscles and joints. Think of this as foam rolling on steroids!

Now, many reading this will argue that foam rolling is worthless and a waste of time as the foam-rolling pendulum has swung towards fitness and rehab professionals bashing this technique. BUT there is quite a bit of research supporting the use of foam rolling, and it’s ability to create temporary improvements in mobility.

Many focus on the temporary gains and argue that because foam rolling doesn’t create long-term changes, we should abandon this practice. But foam rolling’s temporary effects can make it a valuable tool to incorporate into a larger mobility plan.

Absolutely! Just like foam rolling, instrument assisted soft tissue mobilization tools, etc., BT does a great job of improving mobility. I’d say after a year of utilizing this in the clinic and on myself, it has become my favorite was of performing soft tissue mobilization, and my patients love it. Athletes who have tried BT will also tell you that foam rolling doesn’t even compare to the feel of BT. When performed properly, body tempering is more intense than foam rolling without being more painful.

How do we accomplish more intensity without pain? By utilizing different loads with body tempering based on the body part, we are working, we can get an area loaded so that the athlete feels significant pressure without being painful. From there, body temper that muscle/joint/area for 1-2 minutes.

Because most BT devices are weighted (from 22 – 200 lbs.), you would think this would be painful, but the large surface area of the cylinders disperses the pressure. In contrast, when I see many other manual therapists pressing into a muscle with their hands has less total weight behind it. Still, a smaller surface area, making it frequently more uncomfortable.

The pec minor is a great example of this where hands-on work is often a bit painful for patients, but when I body temper it for 30 seconds, the patients don’t report pain, but we quickly notice that pec minor relax and the shoulder drops back.

Here’s the key to BT, though…as with any passive mobility technique, we want to follow it up with active movements to help “lock-in” the mobility changes we get. For example, when working on thoracic spine mobility, I may use body tempering by laying a device across an athlete’s upper back on various areas for a few minutes. We’ll then follow that up with something like a Z-press, which is a great drill for strengthening the thoracic spine as a follow up to body tempering.

Here are a few other protocols I use with body tempering.

What Can I Use for BT?

Donnie Thompson has been straightforward with the ease of getting into body tempering. He’ll often suggest taping kettlebells together or getting scrap steel for cheap options to begin body tempering.

I prefer to use The Forge body tempering device for a few reasons. First, it is the only loadable body-tempering device. It weighs in a 35lbs but can be loaded up to 200+ pounds making it very versatile (and not taking up as much space as having multiple devices of different weights).

Second, it has an easy grip on the inside, which makes lifting easier and safer than many of the homemade devices without a solid grip.

Finally, the ends of the Forge are capped, making it great for working on specific pinpoint areas. I especially like this for work on the pec minor.